My cat is aggressive. What does it mean?

Understanding cat aggression can be hard. Cats are equipped with claws and jaws that can inflict serious injuries. When threatened, they can use aggression to defend themselves, but this is usually a last resort when all else has failed. Before they choose this course of action, they have to weigh up the chances of success. If aggression fails to work, their opponent does not back down and they lose the fight, they risk being killed or injured. Consequently, most cats will try a whole range of other tactics to resolve the situation before resorting to violence. The strategies used for staying out of trouble vary, but if they fail, the threat appears too quickly, or they learn that these strategies don’t work, they will use aggression instead.

Most aggressive behaviour is designed to prevent conflict rather than invite it. The various signals, body postures and noises are usually intended to keep others away rather than draw them nearer.

A cat doesn’t want to get into a fight will hiss violently and loudly to make the other cat back off. She crouches and tucks her tail in just in case her hiss is unsuccessful. Her head and face show the aggressive stance she has taken and her ears and whiskers are forward to support her hiss. Her body stance and head show that she is not completely committed to aggression and she hopes that her aggressor will respond to her hiss and back off.

Don’t mess with me

A worried cat will try to make herself as big as possible to encourage her opponent to back down. The hair on her body will be fluffed up and she will arch her back so that there is a dramatic increase in her apparent body size. To get the most out of this posture, cats usually turn sideways on to the aggressor to show how large they are. She is hissing loudly and she stares at her attacker with her ears erect. 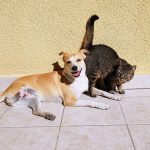 Since the dog is not advancing, the cat can react slowly to the threat and therefore avoid triggering a sudden attack by the dog by making any fast movements. The cat has raised himself from a sleeping position and arches his back to make himself look bigger. The hair on his back is beginning to fluff up and he is ready to hiss or spit a warning in case the dog decides to come closer.

A cat not impressed by another cat’s advances will turn his head to stare with his ears rotated so that you can see their backs from the front. The ears signal that he will be aggressive if pushed further and it is wise for the other cat to back down, as she is already beginning to appreciate.